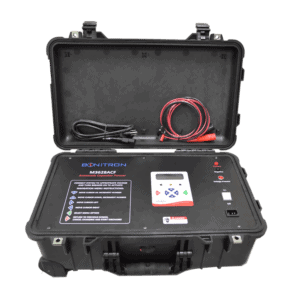 It has become a common practice for companies to keep spare Variable Frequency Drives (VFDs) for quick replacement as needed.  VFDs that have gone unused for an extended time can experience degraded electrolytic capacitors. The capacitors can fail, even catastrophically, upon the energization of the VFD.

When a VFD sits idle, without being energized for a lengthy period of time, this oxide layer can become brittle, cracked, and generally degrades. This degradation will cause increased leakage current when the capacitor is energized — more degradation results in higher current and possible short circuits within the capacitor. Capacitors may fail due to overcurrent when full voltage is applied due to insufficient or failed dielectric material between the two conductors.  Even though the spare drive has never been energized, it now becomes another failed drive. Capacitor Reforming Service can alleviate the problem of failed back-up VFDs.

Recommendations for storage of Electrolytic Capacitors

Store electrolytic capacitors in a dry location at room temperature and out of direct sunlight. Apply power to the drives for 30-60 minutes once every year.

Most DC bus electrolytic capacitors may be “reformed” through a controlled process involving incrementally applied voltage, current limiting, and dwelling for a prolonged time at each incremental step of voltage.  This is also known as trickle charge. This process regenerates (reforms) the oxide layer which serves as the dielectric separating the anode and cathode of the capacitor. The process can take from one to two hours per drive, depending on the rating.

Allied Industrial Marketing, Inc. offers a service to extend the useful life of VFDs, by reforming the electrolytic capacitors in VFDs of any rating up to 600 Volts. Using two Capacitor Reformers, we can reform capacitors in a few small drives while capacitors in a large drive are also being reformed. Typically, capacitors in several drives can be reformed in about one-half day. Our personnel can come to your facility and conduct the reforming procedures on your drives. In some cases, the VFD manufacturers offer instructions, so knowing the manufacturer and model numbers in advance will enable us to be most productive while on site.

Capacitor Reforming-Extend the life of DC Electrolytic Capacitors in VFDs